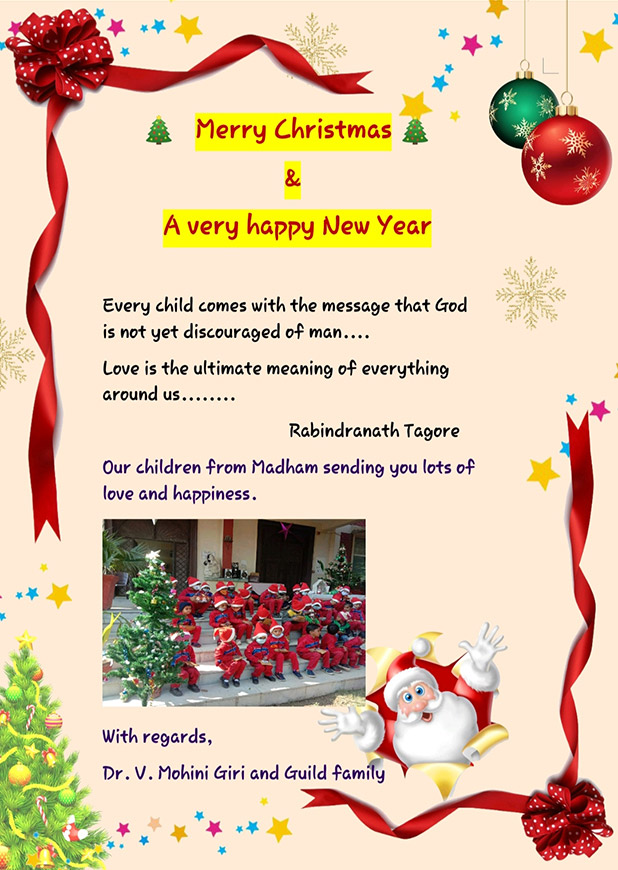 Janmashtami celebration with mothers of Madham 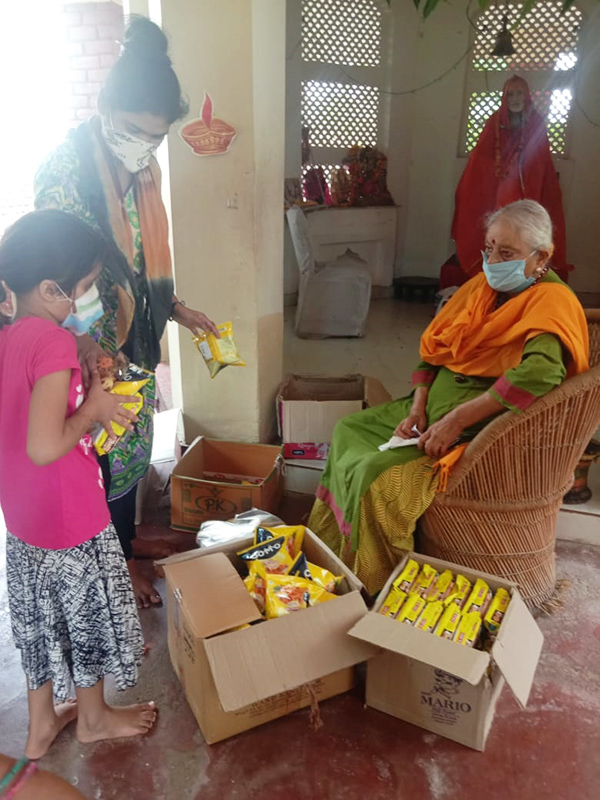 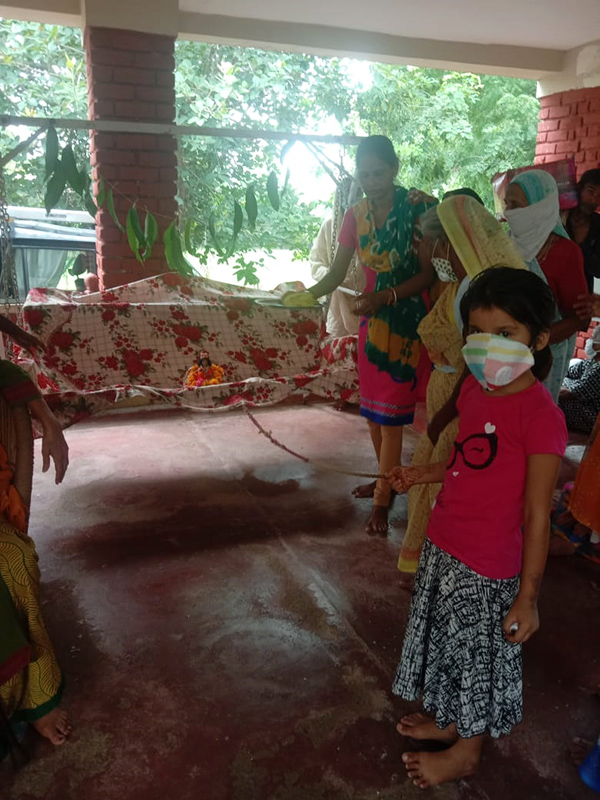 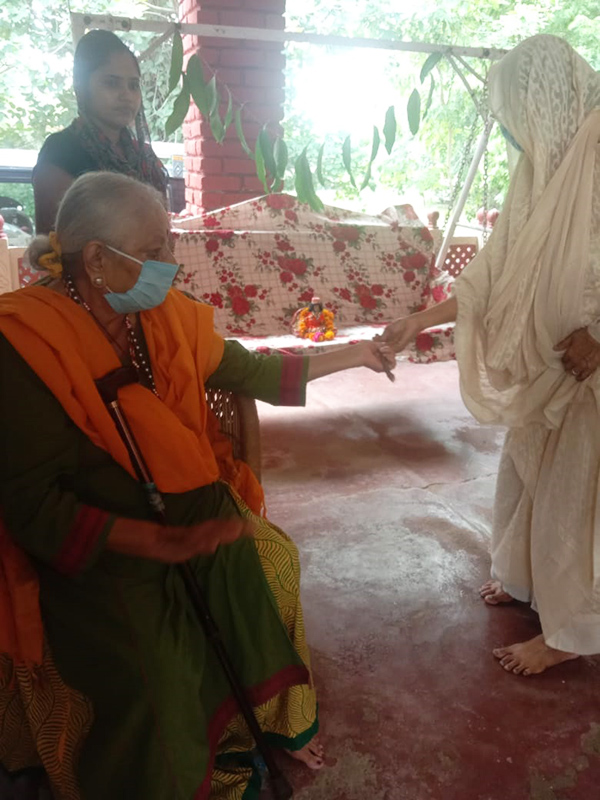 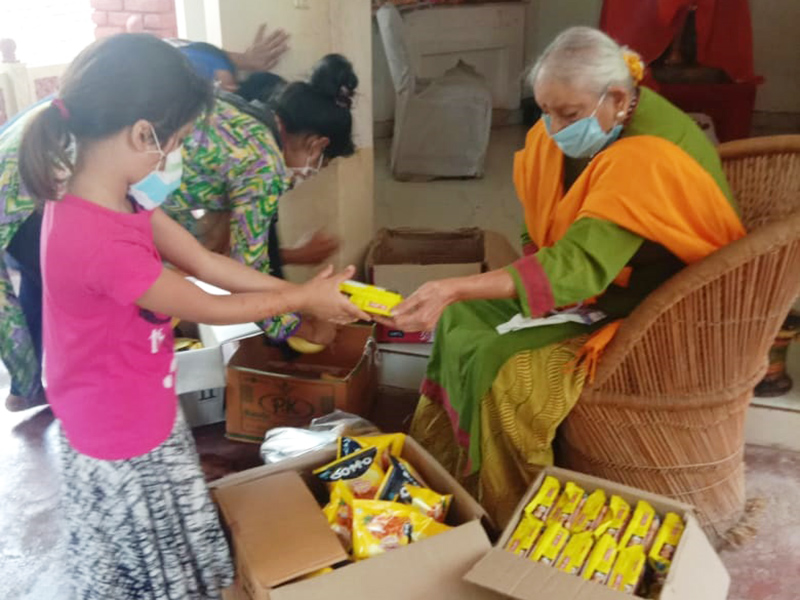 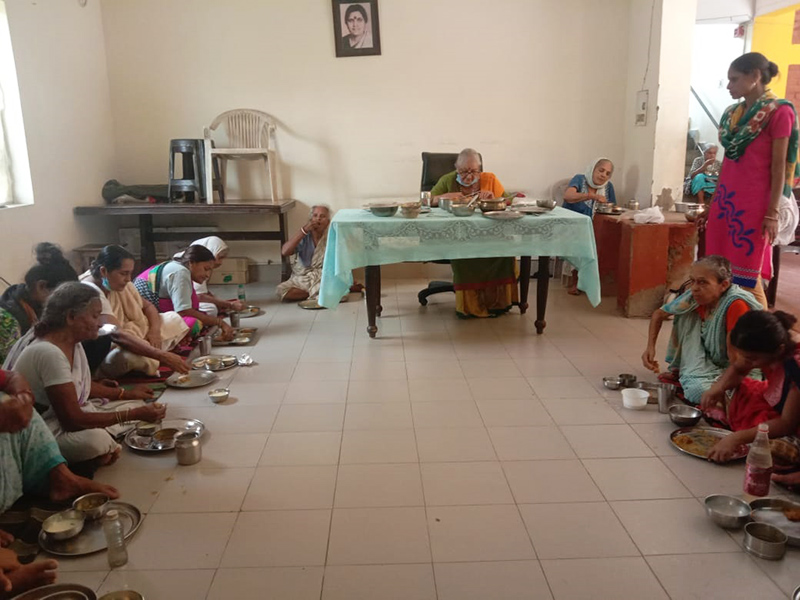 Elderly Mothers of Ma Dham tie Rakhi to Krishna praying for an end to the pandemic
On the auspicious occasion of Raksha Bandhan, widows of Vrindavan today, while renewing the bond of love, tied Rakhi to Lord Krishna and prayed that the COVID crisis ends soon. This event marked the completion of the month-long Arogya Ayushtmati project that reached out to over 5,000 widows of Vrindavan, and provided them with safety and hygiene kits. A campaign was launched to raise awareness among the community members as well.
Implemented by Guild For Service and supported by Shri Arun Bharat Ram and family and Charities Aid Foundation (CAF) India, the Aarogya Ayushmati project has been able to provide some succor to one of the most vulnerable communities in India. The Mothers, as they are fondly called, received kits that comprised, hand sanitizers, masks, Tulsi Tea, honey, turmeric, Vitamin C tablets, roasted gram flour, etc. An awareness intervention through talks and pictorial literature emphasized the drill for protection.
Highlighting the need for such an intervention, philanthropist, Mr Arun Bharat Ram, who generously sponsored the project said: "Today, in India, almost 9% of total population comprises of older people. This section of   population largely remains invisible in a society where development is linked with productivity. They are generally considered frail, sick and a spent force and therefore of no use. It is therefore very important to pay attention to the needs of the elderly and protect them during this pandemic.
Talking about the widows of Vrindavan, Dr Mohini Giri  Founder & Managing Trustee of Guild for Service said, â€œIt is befitting that the Aarogya Ayushmati project reached its finale on Raksha Bandhan day as this whole program was an endeavor to strengthen the bonds of empathy and compassion with the most vulnerable community, widows and elderly widows. Looking after the elderly requires a many hands approach as this synergy between the corporate and civil society organizations has shown. The elderly has not been a recipient of CSR focus. But with the numbers tripling over the last three censes this community will need tremendous committed attention to ensure they live lives of dignity.
Ms Meenakshi Batra, CEO CAF India thanked Mr Arun Bharat Ram and Guild For Service. â€œThe elderly or the senior citizens, because of additional health issues and co-morbidities are extremely vulnerable to COVID-19. This is a crucial time for our elders and they need to be protected and nurtured. I would like to thank the Bharat Ram family, for entrusting CAF India with this responsibility; and also the Guild For Service team for selflessly working for the cause. CAF India will continue to support such interventions in future as well."
Ms Meera Khanna, Trustee & Exec Vice President of Guild for Service while thanking Mr Arun Bharat Ram for the generous support, CAF India for the logistical support and the Guild staff for excellent implementation went on to remark â€œThe pandemic and subsequent lock down was all about withdrawal and self-protection. In such a scenario vulnerable and deprived communities are the worst victims as most of them do not have institutionalized care or social security and are dependent on the generosity and care of civil society. Aarogya Ayushmati was a very timely intervention that enabled three institutions to fulfill their responsibilities to humanity. It is also a precursor to synergies between various institutions for the elderly.
In the month of Saavan, We organised Shiv Puja at Madam and thanked Almighty for taking care of our mothers and giving them good health. 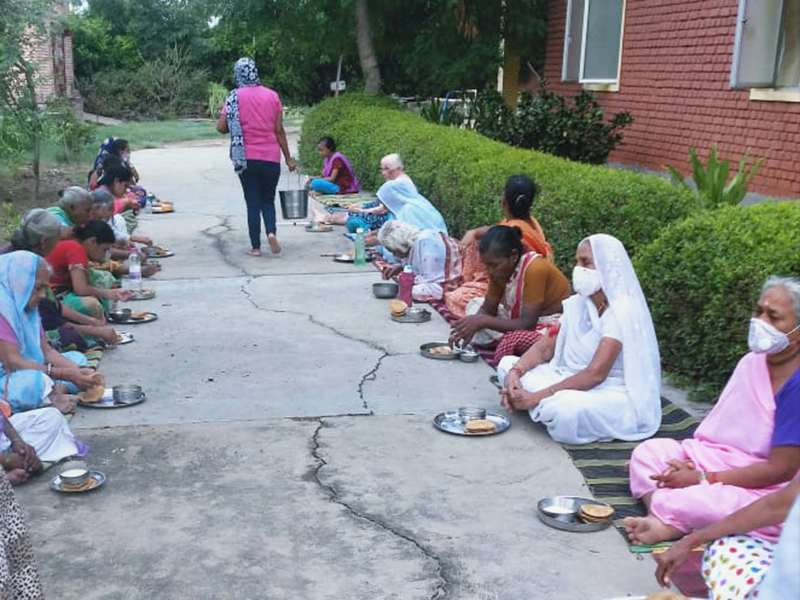 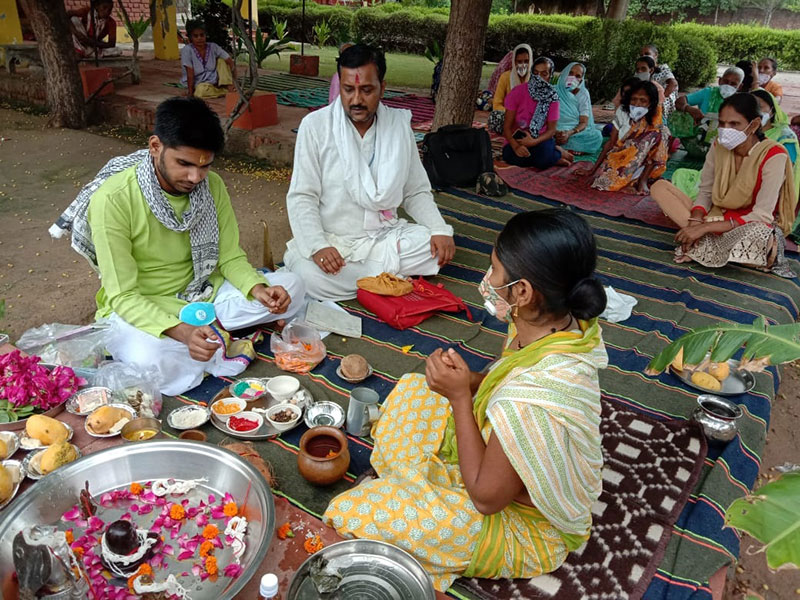 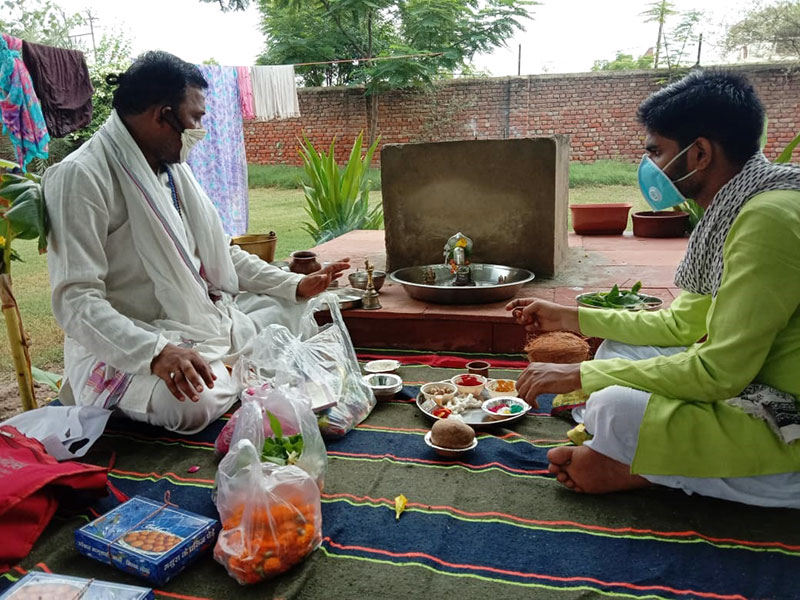 Aarogya Ayushmati: Reaching out to the most vulnerable during the pandemic
In patriarchal societies particularly in the developing world, widows are often treated as second class citizens. There is strong undercurrent of social marginalization, cultural stigmatization and economic deprivation in the treatment of widows who in every sense are the last women in the group of women as a whole. Widows then are treated as double subalterns as women and as widows. If she is poor then the vulnerability is further exacerbated. Lack of  adequate data keeps widows invisible in the discourses of poverty and deprivation. The pandemic  and the consequent isolation and economic hardships has further compromised widows ability to support themselves and their families, cutting them off from social connections at a time when they need most help
In India the city of Vrindavan, the birth place of the Hindu God ,Krishna attracts widows in huge numbers, who come to get spiritual solace or to escape the psychological pressures of widowhood, or to taste freedom away from social constraints or are simply abandoned to eke out an existence. During the pandemic, while efforts were made by the central and state government and civil society organisations to ensure two meals a day, preventive care was severely compromised due to the huge pressures on public and private health care, already battling with the rising number of COVID 19 affected patients.
The Guild for Service  runs a shelter home for widows in Vrindavan, took the lead in distributing nutritional, health and protective supplements to 5000 widows living in shelter homes, colonies and on the streets. The intervention Arogya Ayushmati  which means good health and long life, was facilitated by CAF India and financially supported by an industrialist Arun Bharat Ram and his family, in an impactful synergy of civil society and industrial house partnership. The distribution included protein supplements, honey and turmeric  and holy basil traditionally accepted in preventive care, and masks and sanitizers. Simultaneously COVID 19 preventive care was explained giving the much needed information to a group that could be highly vulnerable to the infection.
Battling the risk of infection and  maintaining social distances , the Guild health workers patiently explained health care to the widows while ensuring that the kits reached everyone 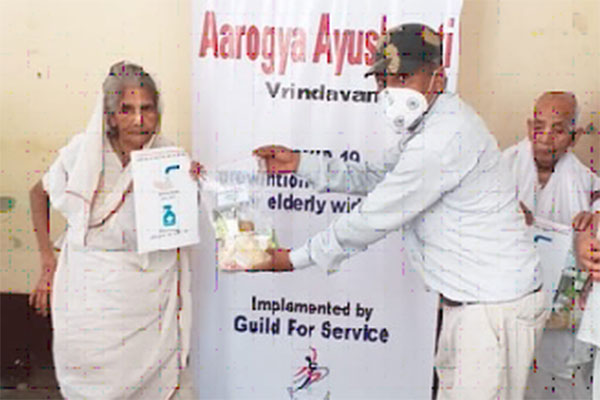 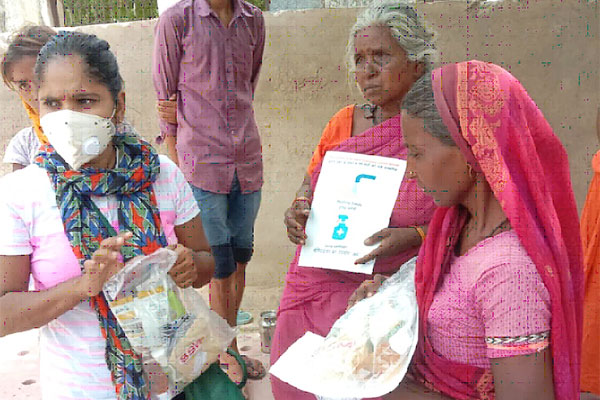 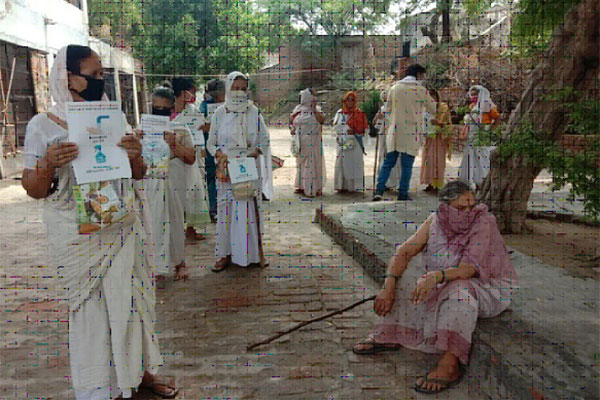 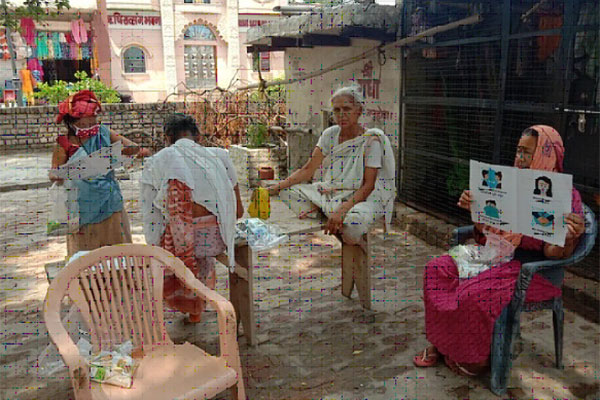 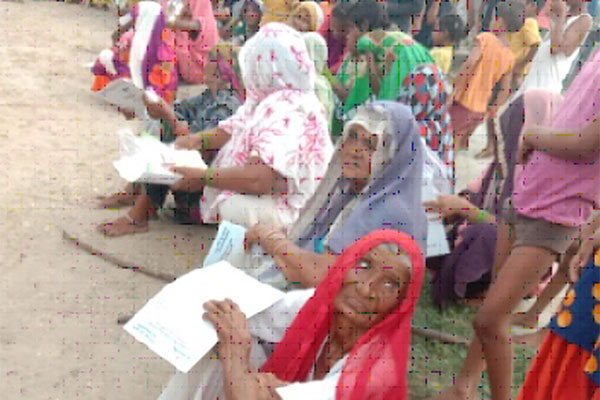 Aarogya Ayushmati COVID 19
Prevention intervention for elderly widows in Vrindavan Supported by Industrialist and philanthropist Shri Arun Bharat Ram Family Facilitated by CAF India
Guild for Service implements a strategy to provide some protection to 5000 elderly widows through distribution of nutritional and health supplements and protective masks  Project launch 3rd July 2020 at Vrindavan covering ashrams ,shelter homes ,villages, and congregation
This is in continuation with the Guild efforts to give dignity to old age
ROUND TABLE DISCUSSION ON OLDER PERSONS AND AGEING
The event took place on the 6th of October, 2016 at Ford Foundation Conference Room, New Delhi, commemorating the UN International Day of Older Persons (UNIDOP).
It was attended by some renowned activists and development sector professionals like Mr Mathew Cherian (Helpage ), Ms Meera Khanna (Guild Of Service), Ms Sujaya Krishnan (Former Joint Secretary, Ministry of Health & Welfare, Mr Bijoy Patro (One World Foundation, India) and many more,  who are working towards creating a sensitized society in which the older persons can live with dignity and get the needed respect and care.
It began with the presentation on the National Policy on Older Persons announced in 1999 by the Govt. of India. Dr V Mohini Giri (Chairperson, Guild of Service) was the Chair of the concerned committee.
Some of the major recommendations which emerged in the course of discussion are as follows:
- New Provisions should be added to the New Policy.
a. Universal Non-contributory pension
b. Universal health insurance
c. Barrier free age friendly cities
- Need a different window or department which should be answerable for its progress and current status.
- Establishment of Department of Senior Citizens under the Ministry of Social Justice and Empowerment.
- Establishment of Directorates of senior citizens in States and Union Territories.
- National /state Commission for Senior Citizens.
- Role of Block Development Offices, Panchayat Raj Institutions and Tribal Councils/Gram Sabhas.
- International push is needed.
- International Covenants are to be passed and signed by the concerned governments.
-National Commissions and laws to safeguard older people.
- Identification of the right person to mobilize and campaign for the act.
- Establishment of steering committees is needed.
https://m.facebook.com/story.php?story_fbid=4223862957653751& id=100000902661709&sfnsn=wiwspwa&extid=6dKMKiY5vxvGTrjA